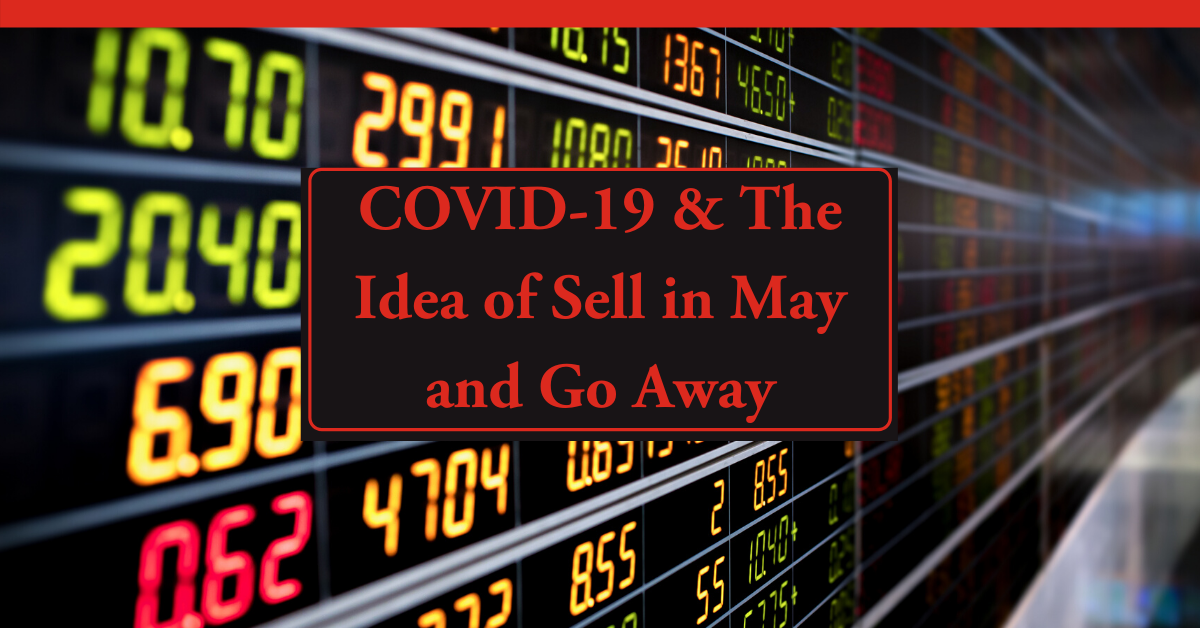 One of the oldest stock market strategies is to “Sell in May and Go Away.” If you factor in this seasonal “strategy,” COVID-19 might make you think twice about employing. Especially on the heels of the best monthly performance for the stock market since 1987.

“Sell in May and go away” is a well-known trading adage that suggests that investors should sell their stocks in May to avoid a seasonal decline in the stock market.  An investor selling his or her stocks in May would then buy stocks again in November because the November through April period shows significantly stronger growth in the market than the other half of the year.

The St. Leger Stakes is one of England’s greatest horse race and is run in late September.  London traders would sell their shares, enjoy their summer, and return to the market after the St. Leger race.

The idea is based on seasonality and with this strategy, traders are only invested in the stock market for about six months of the year (November through April).  These months are typically the strongest period of the stock market.  Investors sell their stocks in May, save their money in cash, bonds, or another less risky investment, then buy stocks again in early November.

Statistics on this Strategy

As it turns out, stocks have done better during the winter-early spring period.  According to the Stock Trader’s Almanac, since 1945 the S&P 500 has gained a cumulative 6-month average of nearly 2% from May through October on a price return basis. And for the 6-months from November through April, the S&P 500 has gained 6.7%, on average.

In addition, the S&P 500 has lost money in only 13% of the November-April time periods since 1945 and about 33% of the time from May through October.  That success rate is remarkable. Maybe the horses are onto something after all?

But This Time It’s Different?

This is probably the most dangerous phrase in all of investing: “this time it’s different.” In fact, if you are discussing investments, the markets, or anything financial related and someone says this, don’t walk away, run.

This time it’s different? Utterly dumb. Especially when you consider what happened in April 2020.

Explanations for the November-April Success

The reality is that there is a lot of money moving throughout the economy, and the stock market, from November through April.  Here are some examples:

Limitations to this Strategy

Despite these favorable statistics, there are limitations to implementing this strategy.

Why “bet the farm” on a simple seasonal strategy having its origins in a summer break before a horse race? That would be like gambling…

Working with Your Financial Professional

The key to successful long-term investing, of course, lies in following wise strategies.  Your financial professional should understand these strategies.  It is generally best not to rely on interesting statistics that are not explained by actual market trends or economic analysis.

No specific investment strategy is foolproof. Your best strategy as an investor is not to base your plans on market timing or the season. Instead, focus on the traditional, sensible factors that include assessment of the business cycles, changing economic conditions, and news from the market.

Your financial professional an appropriate source for information about how to handle your money.  He or she can help guide you in planning for the future.

No investment strategy or risk management technique can guarantee return or eliminate risk in all market environments.

The opinions voiced in this material are for general information only and are not intended to provide specific advice or recommendations for any individual.

All information is believed to be from reliable sources; however LPL Financial makes no representation as to its completeness or accuracy.

The Standard & Poor’s 500 Index is a capitalization-weighted index of 500 stocks designed to measure performance of the broad domestic economy through changes in the aggregate market value of 500 stocks representing all major industries.

Dow Jones Industrial Average (DJIA), or DOW, is the most widely used indicator of the overall condition of the stock market, a price-weighted average of 30 actively traded blue chip stocks, primarily industrials. The 30 stocks are chosen by the editors of the Wall Street Journal. The Dow is computed using a price-weighted indexing system, rather than the more common market cap-weighted indexing system.

The NASDAQ-100 is composed of the 100 largest domestic and international non-financial securities listed on The NASDAQ Stock Market. The Index reflects companies across major industry groups including computer hardware and software, telecommunications, retail/wholesale trade and biotechnology, but does not contain securities of financial companies.

This article was prepared by RSW Publishing.